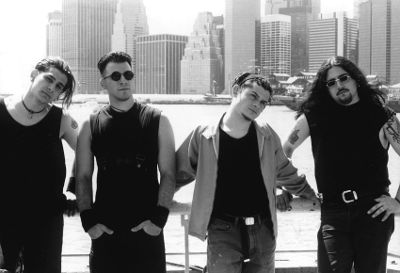 Brooklyn-based alternative metal band Life of Agony was formed in the summer of 1989 by its lead vocalist Mina Caputo. Furthermore, guitarist Joey Z, bassist Alan Robert and the Type O Negative drummer Sal Abruscato supplemented first band’s line-up. Putting great efforts into their first endeavor, the debut studio record entitled 'River Runs Red' was released in 1993 through Roadrunner Records. Although at the time of release, the album was not able to get into any charts, later it was in a somewhat more dignified. For instance, Rolling Stone included an album in the list of the greatest metal albums of all time in 2017 (58 position). It is worth noting the theme of River Runs Red is rather specific and the album is considered primarily as a conceptual, aimed at the subject of suicide and various harmful addictions.

The next Life of Agony musical work became their second studio album Ugly released in 1995, consolidated the group's position as one of the most remarkable playing alternative metal. However, unfortunately, during this period the famous drummer Sal Abruscato left the band. 1997 'LP' Soul Searching Sun' became the latest recording along with the Roadrunner label, after which the band slightly slowed down the pace of work on music, and eventually announced a break in creativity. One of the main reasons was the departure of lead vocalist Mina Caputo. Thus, throughout 1999-2002, all fans of alternative metal for a while forgot about the existence of Life of Agony, but still, the band were far from the end.

After a long hiatus, the original band line-up reached a consensus and united under the same name Life of Agony again. Therefore, the band returned to musical activities, performed with many tours, later presented new musical work, namely the album Broken Valley through Epic Records in 2005.

Then it seemed like the success of the group was growing rapidly, Life of Agony went on to tour with Dream Theater, Megadeth, and numerous other metal bands during 2005's Gigantour. Caputo was featured on the Within Temptation 2007 track "What Have You Done", which eventually became a popular hit.

Nevertheless, in 2012 the next band ’s disbandment repeated again, each member focused on his own project. However, it was clear to everyone that Life of Agony should exist, and the group resumed its activities in 2014. And then everything turned round again, the new prolific tour has begun, sign a contract with Napalm Records, the announcement of subsequent work - the album A Place Where There's No More Pain - their first studio album in 12 years, which came out on April 28, 2017.